Ignore the calls of treason – Trump handled the press conference with Putin well. Here’s why 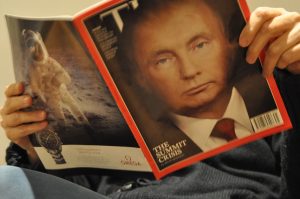 In a column published on July 18, 2018, Mary Dejevsky takes a different view on Donald Trump’s performance at the Trump-Putin summit in Helsinki. We scrutinise her interpretation of events.

In her article from 18 July 2018, Mary Dejevsky defends US president Donald Trump against criticisms of his performance at his Helsinki Meeting with Russian president Vladimir Putin.

Her central claim seems to be that while some people say that Trump lost to Putin at the press conference, he didn’t: he lost to his domestic enemies, who mistakenly criticized him for acting respectfully to Putin, and for failing to produce results.

This central claim is an alternative interpretation of events that is at odds with most observers (as Dejevsky herself notes this includes Russian observers). Where others saw Trump bested by Putin, Dejevsky argues that a ‘closer look’ reveals he did well and got ‘results’. Interpretations and evaluations of events are typically evaluated in terms of ‘fit’, that is, how well they cover the known facts.

Dejevsky claims that rather than being meek and submissive, Trump was merely being respectful to Putin, because

“Trump understands something many American leaders have not: that no relationship will be   established, talks will hardly get off the ground, unless those on the other side feel they are being treated with respect.”

That Trump understands the value of treating his counterparts with respect seems at odds with many events from the Trump presidency so far – his early tweets about ‘Li’l Rocket Man’ or his seeming pushing aside of the president of Montenegro at the first Nato summit, and the long series of seemingly dominance seeking handshakes. No mention of these widely publicized events is made in the piece.

With respect to the ‘results’ that Trump obtained from the meeting with Putin, Dejevsky gives the following evidence: The two leaders felt relaxed enough to disagree, including in public, which is good. Dejevsky then goes on to discuss various results over Syria and arms treaties. These comments of hers don’t address the issue of whether the outcomes of these discussions favoured the US or Russia, however – which is the key point of debate. Trump achieving agreements through concessions is presumably not a success, neither in the eyes of Dejevsky nor Trump’s critics. Hence it is odd that she is not commenting on which side these discussions favoured.

In particular, one of the key issues among Trump’s ‘domestic critics’ was the fact that the outcomes of the meeting are largely entirely unknown, because in a break with protocol, the only other person present in the Trump-Putin meetings were the translators. Consequently, even senior administration officials reportedly still have no clear idea what was discussed. And, of the outcomes actually highlighted in the press conference itself, one was met with outright ridicule. These counter-arguments to the assessment that the meeting was a success from a US perspective are not addressed.

Dejevsky’s piece highlights two very different ways in which an argument might be weak:
The first is entirely about the relationship between an argument and the claim it seeks to support. Here, an argument being weak means that, even if true, the support it provides to the claim is weak. The second way an argument might be weak concerns the argument itself: it may itself be unsupported or subject to challenge through a counter-argument. In short, in the first case, the premises don’t much support the conclusion, whereas in the second case, the premises themselves seem problematic.

The piece contains examples of both kind. As an example of the first, consider the argument that the talks were a success because “the talks went on almost twice as long as scheduled’’. Why is this evidence for success? One could equally (or even more plausibly) imagine disagreement and length as an argument for the talks being a failure.

Potentially weak arguments of the second kind are found throughout the piece: does Trump really believe that showing respect is essential? Where the outcomes really beneficial to the US? This second type of reason (lack of support or openness to challenge) is not normally the focus of our analysis for a number of reasons. First, there will always be some claims that are ‘unsupported’ because the reasons have to stop somewhere, and in a short piece, not much can reasonably be asked. At the same time, pretty much any argument might be open to subsequent challenge, including challenges that could not possibly be foreseen at the time. As a result, some limiting conditions have to be in place for ‘lack of support’ or ‘open to counter challenge’ to be meaningful critiques. The obvious place to look is in the context of the piece: an argument legitimately seems “unsupported” when it is likely to seem dubious to many readers. A good indicator of that is if it has, in fact, already been challenged in the wider context of the piece. In this case, it would seem odd to consider ‘strong’ a premise most will not accept, or overlook a counterargument that has, in fact already been made.

These are not hard and fast lines, and there will be judgment calls to be made with respect to whether or not a counter-argument is sufficiently ‘in’ the space of the debate already that it requires addressing or not. For Dejevsky’s piece, we think that the failure to address counterarguments is a problem, because they are in effect already mentioned in the piece: Dejevsky’s starting point is Trump’s “domestic critics”, she alludes to the interpretations of Trump’s behavior in light of the Mueller inquiry, and even mentions critics of his seeming ‘meekness’ in the piece.

These distinctions matter, finally, because they relate to our fundamental goals in writing these critiques. We are seeking to provide analyses that are, in some sense, ‘objective’. That is, we are seeking to be ‘referees’, and not just another party to the debate. So, we will not include counter-arguments that could be drawn from elsewhere. Instead, our critical analyses will be restricted to the arguments that are actually advanced within the article or opinion piece we are analysing. There will have to be specific reasons (such as here in Dejevsky’s piece) for arguing that an issue that has been ignored should have been addressed, because it was already sufficiently ‘in’ the debate to not be ignored.

← Britain’s delusions about the green belt cause untold misery